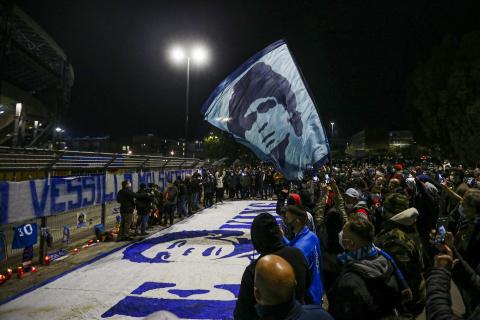 Millions of fans paid tribute and Argentina was sent into mourning on Nov. 25 as Diego Maradona, one of the greatest footballers of all time, died aged 60 after years of drug and alcohol problems.

Thousands of mourners, many in tears, and many wearing the World Cup-winner's number 10 Argentina jersey, gathered in streets and at stadiums around Buenos Aires in spontaneous celebration of the player and manager's riotous life.

The outrageously skilful Maradona, forever remembered for his "Hand of God" goal against England in the 1986 World Cup quarter-finals, died of a heart attack while recovering from surgery to remove a blood clot on his brain, a member of his entourage told AFP.

Family members were summoned to Maradona's home north of Buenos Aires before his death was announced, triggering an outpouring of grief across the country and worldwide.

Lionel Messi, Argentina's modern-day superstar, led the tributes as he said: "He has left us but he will never leave us because Diego is eternal."

Brazilian legend Pele, 80, constantly compared with Maradona in the debate over football's greatest player, called him a "dear friend" and said he hoped they would "play together in the sky" one day.

Public prosecutor John Broyard said Maradona's death has "only natural characteristics". His body will lie in state in the presidential palace during the national mourning.

Despite major coronavirus problems in Argentina, with more than 1.3 million cases and a death toll topping 37,000, fans gathered at landmarks including Buenos Aires'...