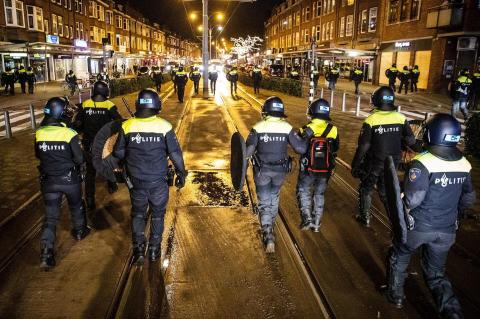 Police took to the streets of Dutch towns and cities in force on Jan. 26 night in an attempt to prevent violent rioting that shook the country for three successive nights after a nationwide curfew was introduced to curb the spread of the coronavirus.

By late night, the increased police presence appeared to have paid off, with no major rioting or clashes between youths and police reported.

"I think what has also helped is that you see an atmosphere among the population that this (rioting) is unacceptable," Woelders told another talk show, Op1.

Police in Rotterdam said they arrested 33 people for minor offenses and vandalism before the nightly curfew took effect at 9 p.m. Local broadcaster Rijnmond reported that riot police were deployed in the south and west of the city, but police did not immediately report any major disturbances.

In Amsterdam, riot police were dispatched to a commercial street where a large group of youths had gathered and set off fireworks, but there were no violent confrontations.

The rioting, which started with the torching of a coronavirus testing center in a fishing village on Saturday night, is the worst to hit the Netherlands in years. It was initially triggered by anger over a tough coronavirus lockdown that has been in force since mid-December, but calls for rioting swirling on social media and mainly spread among young people increasingly fueled the unrest.

Schools have been closed in the country since the Christmas holidays. Police said on Jan. 26 afternoon that video images showed that many rioters were young teenagers and that many of the people they arrested were...