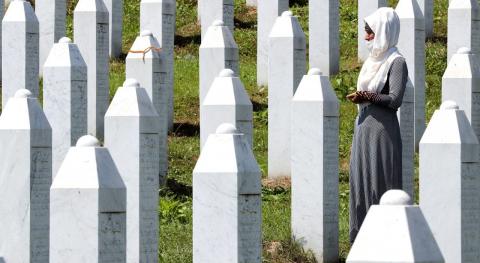 Mortal remains of one person have been exhumed in Potocari, near Srebrenica in eastern Bosnia. The Missing Persons Institute of Bosnia and Herzegovina assumes the remains belong to a Bosniak woman who was brought to the location and buried there in 1995.

The remains will be transferred to the Commemorative Center in Tuzla for criminal-technical and court-medicine processing and taking of bone samples in order to determine her identity through DNA analysis.

Besides the State Prosecution, which managed the exhumation, the institute investigators, court medicine experts, workers, mechanisation and members of the Police Station in Srebrenica were present at the site.

According to the Missing Persons Institute, from the discovery of the first grave containing the remains of Srebrenica genocide victims in 1996 until today 41 primary and 39 secondary graves have been discovered.

A total of 6,652 victims whose remains have been excavated from 84 graves have been identified and buried at the Potocari Memorial Center, while 237 victims have been buried at other locations at the request of their families.

The search for around 1,200 more victims killed in the Srebrenica genocide continues.