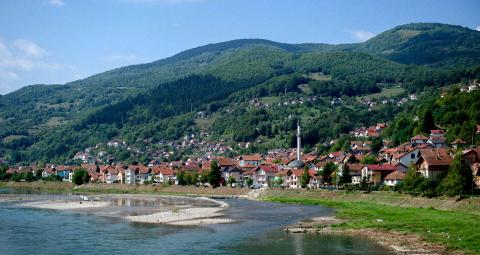 A view of the western bank of the River Drina in the centre of Gorazde. Photo: Tom Barlow-Brown.

Before the outbreak of the war, Gorazde enjoyed great prosperity, giving many of its 37,000 residents a better standard of living than many people in other Bosnian towns. The town's population has since shrunk due as the continuing after-effects of the war have drven many to seek work and life elsewhere.

Before fighting broke out in 1992, Mirsada Causevic, a Bosniak, was working in a factory in the town.

"It was wonderful. We were working a lot, but also earning a lot. The town was beautiful. I never expected the sort of things that were about to happen," she said.

At the time, Causevic lived in a house on the eastern bank of the Drina. When Bosnian Serb forces attacked in 1992, her house was so close to the frontline that she was collecting bullets and shrapnel that landed in her street with a shovel.

Savo Heleta, a Bosnian Serb whose family decided to stay in Gorazde, was living close by, also on the eastern bank of the Drina, near the city's police station. His family came under suspicion of collaborating with Bosnian Serb forces from the beginning of the siege.

"The extra complication for us is that we are Bosnian Serbs, the same as the people attacking Gorazde. This created problems for us from the beginning of the war. My parents were taken away in...