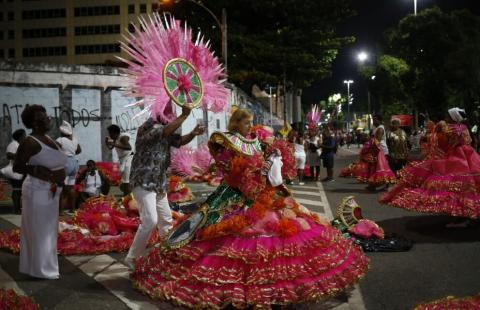 After two long years without its frenetic festival of sparkling sequins, sultry samba and towering floats, Rio de Janeiro is holding its famed carnival parades for the first time since COVID-19 hit Brazil.

In what is sure to be a giant, glittering spectacle of pandemic catharsis, thousands of dancers and drummers descended on the iconic beach city's "Sambadrome," reclaiming the carnival parade venue that was turned into a drive-through vaccination center at the height of the health crisis.

The all-night parades by the city's top samba schools will be the first since February 2020, marking a turning point for hard-hit Brazil, where COVID-19 has claimed more than 660,000 lives, second only to the United States.

Rio Mayor Eduardo Paes officially declared the party open Wednesday, handing the key to the city to "King Momo," the symbolic ruler of the festivities.

"I proudly announce the greatest show on Earth is back," the mayor told a cheering crowd at city hall as confetti rained down.

It was a welcome change from last year, when Paes symbolically handed the key to a pair of health workers in white lab coats and surgical masks after announcing carnival had to be canceled because of the pandemic.

The party again looked uncertain this year when fears of the omicron variant led city authorities to postpone carnival by two months from the usual dates, just before the Catholic season of Lent.

But with more than 75 percent of the South American country's 213 million people now fully vaccinated, the average weekly death toll has plunged from more than 3,000...