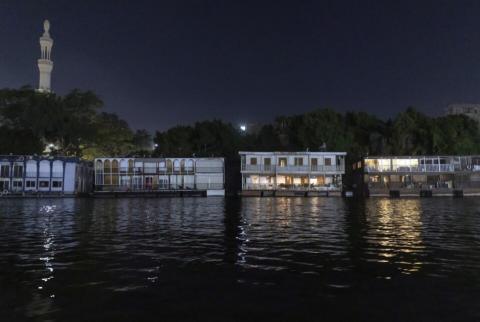 Dozens of vibrantly colored floating homes have for decades dotted the banks of the River Nile, rare havens of leafy seclusion in the Egyptian capital's hustle and bustle but maybe not for much longer.

Residents of the 30 or so houseboats that remain moored on the banks of the Nile last week received eviction orders, giving them less than two weeks before their homes are taken away to be demolished.

"Buying this houseboat was my dream," celebrated British-Egyptian novelist Ahdaf Soueif told AFP. "I furnished it to accommodate my grandchildren and spend my last days here."

The boats have long occupied a special place in the Egyptian collective consciousness, having been the centerpiece of conversations in Nobel Prize laureate Naguib Mahfouz's "Chitchat on the Nile," as well as various classics from the golden age of Egyptian cinema.

But while many have campaigned to protect the houseboats for their historic value, the authorities have argued they are an eyesore standing in the way of the state's grand development plans.

Residents have been offered no alternative accommodation or compensation, unlike others who previously faced evictions, and many have nowhere else to go.

For Manar, a 35-year-old engineer who poured everything into buying her houseboat four years ago, it's a devastating blow.

"I sold my apartment, my father sold his car, and we used my two retired parents' severance pay," said Manar, who did not wish to give her full name.

"People from the slums have been rehoused, the state even moved graves when it built a road through a cemetery, but for us, nothing."

Barely a week after the eviction order, some boats have already been towed off and impounded in a state marina, despite petitions and...