In China, the death of more and more famous people is being announced, prompting residents to question the previous data on mortality from COVID-19, the disease caused by the SARS-CoV-2 coronavirus, writes the BBC.

The State Department said on Jan. 5 it has adopted Turkey's preferred spelling for the name of the country, Türkiye, acceding to a request from the NATO ally after several months of hesitation.

"Romania has no chance of entering Schengen in 2023", said the leader of the Romanian People's Movement Party (PMP) and member of the European Parliament, Eugen Tomac, in an interview with Radio France Internationale (RFI). According to him, the government in Bucharest should consider suing the Court of the European Union, BTA reported. 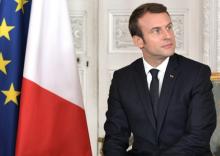 French President Emmanuel Macron has said he is pushing for a "Made in Europe" economic strategy to counter US policies.

During a joint press conference ahead of his meeting with Swedish Prime Minister Ulf Kristersson in Paris, Macron said their discussion would focus on Europe's economic situation.

European Union nations will try again on Wednesday to mold a coordinated approach on if and how authorities should check incoming airline passengers from China for any new COVID-19 variants after several member nations announced individual efforts over the past week.

As of today, Croatia has become the 20th member of the Eurozone and the 27th member of the Schengen area. More than 70 border points with Slovenia and Hungary and 12 - along the sea border are being removed. On this occasion, the President of the European Commission, Ursula von der Leyen, is expected in Zagreb.

NATO chief Jens Stoltenberg said on Oct. 26 he would go to Türkiye "in the near future" to discuss Finland and Sweden's nearly completed process to join the military alliance.

The new prime minister of Sweden, Ulf Kristersson, has assured Türkiye that his government will fulfill the commitments outlined in the trilateral agreement for NATO membership in a phone conversation with President Recep Tayyip Erdoğan.

The Turkish government has repeated its demand for the extradition of terror convicts from Finland in a lengthy technical meeting in Ankara on Oct. 25.

The officials from the justice ministries of Türkiye and Finland met in the Turkish capital and discussed the judicial cooperation between the two countries in the context of the latter's application to NATO.

Sweden's center-right government will fulfil all requirements under a deal with Türkiye to join NATO and will concentrate external relations to its immediate neighborhood while dropping the previous administration's "feminist foreign policy," the country's top diplomat has said.