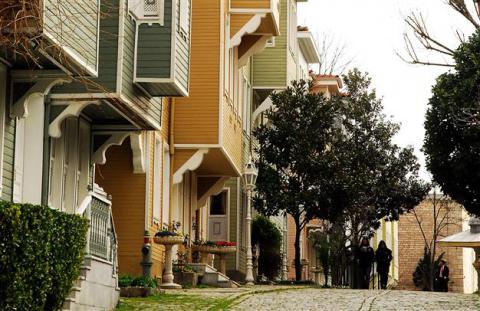 SoÄukÃ§eÅme Street, situated between TopkapÄ± Palace and Hagia Sophia, has been rented out to a local business group, with the goal of turning it into a luxury hotel hub through an 80 million euro investment.

The street is of historical significance, as TopkapÄ± Palace and Hagia Sophia are two of the most important landmarks of Turkish history and have become some of the most attractive tourist sites in Istanbul.

SoÄukÃ§eÅme Street, which literally means âCold Fountain Street,â has been rented by meat and construction company Keskin Group for 10 years in return for 50 million Turkish Liras with its 12 historic Ottoman houses, the fountain that gave its name to streets and historical corridors.

The 12 historical houses, which have been operated by Turkeyâs Touring and Automobile Association after being renovated in 1986, were sold to the company through a tender that took place two weeks ago.

The houses were run by Turing under the name Hagia Sohia houses, but the state transferred the houses and their rights to the private sector for a more lucrative operation, Keskin Group Chairman Recep Ercan Keskin said.

He said his group is in talks with world-known hotel brands for the operation of the wooden houses on the lane and aims to invest a total of 80 million euros into the lane.

âThe worldâs top hotels brands will be here. We aim to open the houses for tourism after an authentic renovation,â he said.

The houses accommodate 100 rooms in total and there are many historical artifacts inside, he also said.

Saying the historical value and location of the lane makes it an attractive resort spot inside the city, Keskin said the group has received scores of...