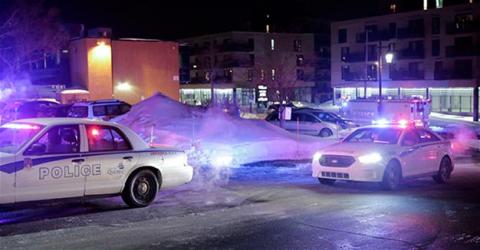 Six people died and eight were injured after gunmen opened fire at a Quebec City mosque, a shooting that Canadian Prime Minister Justin Trudeau condemned Jan. 30 as a "terrorist attack."

Police spokeswoman Christine Coulombe told journalists that two suspects were arrested following the attack, that police were also treating as an act of terrorism, according to AFP.

Trudeau said in a statement that "we condemn this terrorist attack on Muslims in a center of worship and refuge."

"Muslim-Canadians are an important part of our national fabric, and these senseless acts have no place in our communities, city and country."

According to witnesses interviewed on local television, two masked gunmen entered the cultural center around 7:15 p.m. (12:15 a.m. GMT) on Jan. 29.

The motive of the attack was not immediately clear. Police quickly set up in the mosque's vicinity.
Coulombe said those killed were between ages 35 and 70.

Police did not rule out the possibility of a third suspect who had fled the scene.

"It is heart-wrenching to see such senseless violence," Trudeau said. "Diversity is our strength, and religious tolerance is a value that we, as Canadians, hold dear."

Quebec Premier Philippe Couillard said in a series of Twitter posts that the government was "mobilized to ensure the security of the people of Quebec."

"Quebec categorically rejects this barbaric violence," he wrote. "Solidarity with Quebec people of Muslim faith."
Police stationed near the mosque told AFP that they had been preparing for this type of attack "because it's happening all over the world."

"I don't understand why here - it's a small mosque," said a man who was inside the center at the time of...

Turkey-UK defense cooperation 'to grow' after Brexit completed
POST-REVOLUTION ROMANIA, 1990: 30 years since creation of the Union of the Ukrainians of Romania

Private sector foreign debt down at end of 2019