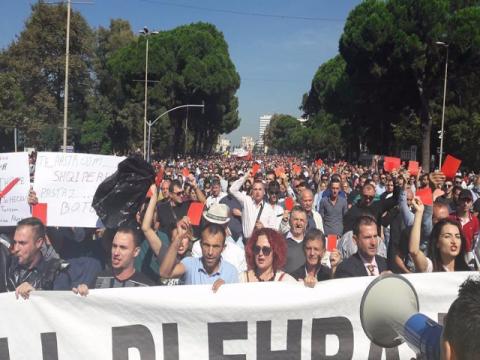 Albania opposition parties have jointly called on the Socialist-led government of Edi Rama to put the longstanding argument over allowing the import of waste to a referendum.

A law on the matter is currently pending, after the President refused to sign it a year ago.

The waste import issue has been a "hot potato" in Albania for at least six years, with both centre-right and centre-left governments trying and failing to adopt laws permitting it as a result of environmentalist and public outcries.

The debate was rekindled again last week when the Rama's ruling majority included a new law in the parliamentary agenda, despite a presidential decree in October 2016 that seemed to close the door against its adoption.

Under parliamentary procedures, if 71 out of the 140 MPs vote against the president's decree, the law can still enter into force. If not, it cannot be adopted again.

Rama's majority has the necessary votes to reject the decree. However, the public outcry over the return of a waste import law onto the parliamentary agenda persuaded the Socialists group to withdraw it.

"There will no longer be a draft law on waste. The Socialist parliamentary group is going to return it to the public for a full debate, based on arguments, not accusations," the head of the Socialist group wrote on Tuesday on Facebook.

However, the opposition parties said they considered the withdrawal of the law a mere political maneuver.

Instead, the centre-right Democrats and the Socialist Movement for Integration, LSI, have demanded a referendum, as a final act to close the waste import issue in Albania for good.

Democratic Party MP Florjon Mima said: "This is a major, sensitive issue. We have to open the road for a referendum." The...