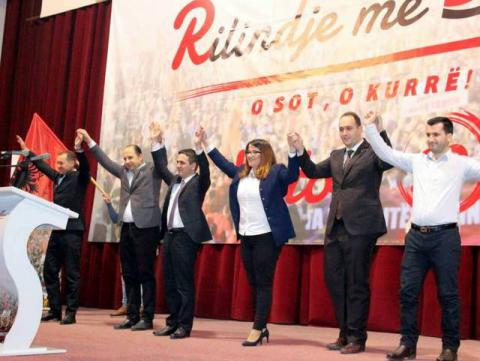 On one side is a group around Bilal Kasami who claims that he is still the legitimate party leader, and who wants BESA's five MPs to consider joining the ruling majority, led by the Social Democrats.

However, only two of the five BESA MPs in the 120-seat parliament remain loyal to Kasami.

On the other side is a group around MP Nexhmedin Karemani and two other MPs. This group disputes Kasami's legitimacy and recently elected Karemani as an interim party leader until the congress.

"[Kasami] was dismissed by the majority and that is that. We will hold our scheduled congress, and if they [the Kasami supporters] want to face the majority, they should come to our congress," Orhan Murtezani, from the fraction that supports Keremani, told BIRN.

But Kasami still holds the party's official stamps and recently defended his legitimacy to lead the party in court.

He has insisted that the majority of BESA members are with him and that his opponents will be forced to form another party after the February congress.

Speaking to BIRN, Kasami last week said that the group opposing him is led by people with deep ties in the NGO sector who "were afraid of losing their posts" in the party leadership after the congress he summoned.

He has accused his opponents of leading the party away from cooperation with the main ruling Social Democratic Union, SDSM, which formed a government last May, and of secretly siding with the former ruling right-wing VMRO DPMNE party, which was accused of authoritarianism.