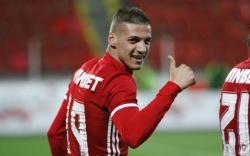 The newspaper also reports that the attacker will most likely leave CSKA in the winter, with the "reds" ready to sell the player "for just 5 million pounds."

The article also reports that the striker has only 5 matches for the national team of Bulgaria. He scored 24 goals in 79 matches in the championship since joining CSKA in July 2016.

If the information is correct, Kiril Despodov may soon be in the elite Cardiff City, who competes in the Premier League of England. The team takes the 17th place in the ranking with 18 points.

Middlesbrough is in the Championship, located in the top half of the table - 5th with 43 points. Aston Villa, who is the third contender for the player, is in 10th place with 38 points, along with Bristol City.

Just for a Day: 805 Fines for Cars without E-Vignettes