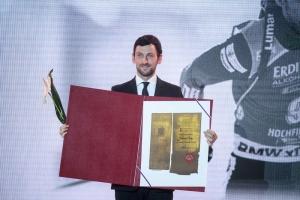 Fak (31) and Garnbret (19) were honoured for top international achievements last year and Bunčič and Urnaut for lifetime achievements as the EUR 9,000 prizes were conferred for the 54th time.

The Croatian-born biathlete was recognised for winning silver in the men's 20-km individual race at the Winter Olympics in Pyeongchang, South Korea in February. It was his second Olympic medal after the bronze in sprint in 2010.

Garnbret is a teen climbing sensation who made history last year by becoming the first sport climber, male or female, to win world champion titles in three disciplines.

She rounded off the feat by securing the overall Climbing World Cup victory in the women's lead discipline for the third year running and finishing fourth overall in the World Cup.

Born in 1949, Bunčič started his career in air sports 50 years ago, first as a parachutist...