EU Warns Romania of Heat Threat to Sheep on Ships 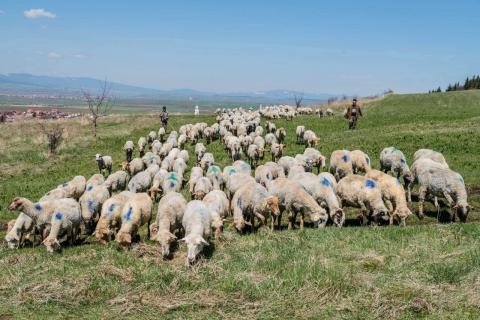 The EU's health and food safety commissioner, Vytenis Andriukaitis, called on Romania on Wednesday to halt the export of 70,000 sheep to the Persian Gulf this month due to the extreme temperatures expected in the area that would make impossible to guarantee that the animals would not suffer in transit.

"Today I sent a letter to [Romanian] Minister [Petre] Daea and asked to stop the shipment of 70,000 Romanian sheep to the Persian Gulf since appropriate animal welfare conditions cannot be guaranteed," Andriukaitis wrote on Twitter.

His message was accompanied by an open letter to the Romanian government.

"We have received footage showing terrible conditions in which animals were transported by livestock vessels to the Persian Gulf during the summer," the open letter said.

The sheep are bound for the Islamic 'Festival of Sacrifice', which is to be held in Kuwait, Qatar and the United Arab Emirates in August, according to a statement released by the Eurogroup for Animals, which seeks to improve the treatment of animals in the EU.

Temperatures "will reach 46 °C" in July when the animals are being transported by sea, Andriukaitis' open letter warned.

A spokesperson for the Romanian Ministry of Agriculture told BIRN that the Bucharest government "has not taken a position" on Andriukaitis' request yet.

The EU commissioner has previously expressed concern to the Romanian authorities about the conditions in which sheep are being ferried to the Persian Gulf.

The Bucharest government then assured him that it was "pursuing a modification of the national legislation to prevent non-compliances in animal welfare during maritime transport of wild animals".

But Andriukaitis said in the open letter that "the measures announced...