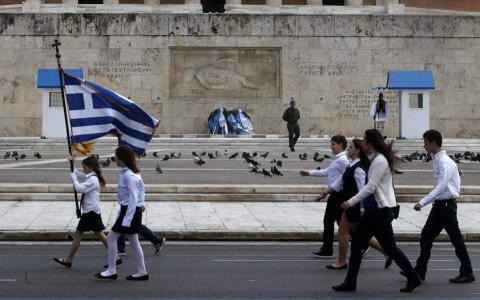 Flag-bearers in primary school parades on national holidays will no longer be selected by lot but on the basis of academic performance, according to new rules put forward by Greek Education Minister Niki Kerameus.
Two pupils in sixth grade, the final year of primary school, will be selected each year, with one serving from the start of the academic year until January 31 and the other from February 1 to the end of the school year. This means different pupils will carry the flag in parades to mark Independence Day on March 25 and Ochi Day on October 28, which commemorates Greece's response to an Italian ultimatum in 1940 and the country's entry into World War II.
Random selection of flag-bearers was introduced by Kerameus' leftist predecessor, Costas Gavroglou, a move that was criticized at the time as an assault on the ideas of achievement and excellence.