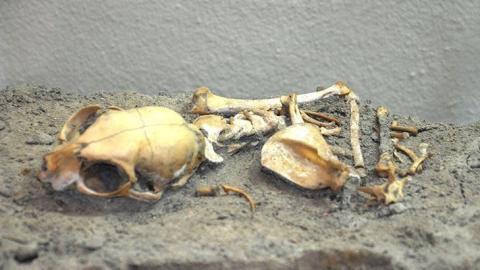 Excavations at the undersea metro construction sites of Yenikapı and Marmaray in Istanbul that were carried out between 2004 and 2014 in Istanbul unearthed cat remains and skeletons along with many other animals dating back to the Byzantine era. Some of these were given to the Istanbul University Cerrahpaşa Veterinary Faculty of (IUC).

Veterinary Faculty Osteoarchaeologist Professor Vedat Onar, who examines the bones of living creatures and aims to reach information about the past through scientific analysis, said that the cat skeleton donated to them provided information about life in Istanbul in the past. He emphasized that cats in Istanbul during the Byzantine period lived in very good conditions compared to those in Europe and that they had no pathological disorders.

IUC Veterinary Faculty head of the Department of Veterinary History and Deontology, Altan Armutak also said that in the Byzantine period, there were fish-eating cats around the fishing shops in Kumkapı, Yenikapı and Aksaray, especially in Istanbul.

"There was an aggressive attitude towards the cats since the 1000's in the west at that time. In a sermon given by the Papacy, cats were claimed to be harmful animals, and to be representatives of the devil they cooperate with. We are witnessing that thousands of cats were burned in Europe at that time. With witchery accusations, we know that older women were burned by being put in bags together with cats."

"We see that cats were stuffed in bags and beaten with sticks; hanged on tree branches and burned from below with fire. They believed that the cat's screaming caused the devil to escape. In Europe, these animals had a humiliating period, if not shameful. Unfortunately, there were no cats left in Europe, and as a result,...