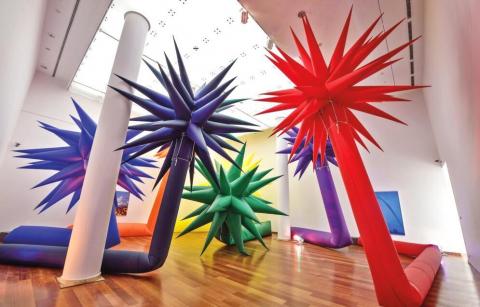 Sabancı University Sakıp Sabancı Museum's (SSM) exhibition "ZERO. Countdown to the Future," which drew global attention back in 2015, is now online to meet art enthusiasts, shedding light once again on the ZERO movement.

Born in the aftermath of the Second World War, ZERO received its name from the countdown until the launch of a rocket and soon became one of the major avant-garde movements of the mid-20th century.

Drawing upon digitalSSM's sources, the online version of the exhibition provides viewers with a thematic framework and presents ZERO artworks through an arrangement based on the elements of fire, color, vibration, light, shadow and space.

Nazan Ölçer, the director of SSM, said: "The ZERO movement was born after the Second World War thanks to the efforts of a handful of young artists, bringing hope and offering the world a bright future. This is exactly what we need today in the times we are passing through: namely hope and freedom from anxiety."

Stating that throughout history, art always proved to be an important means in coping with issues like war and epidemics, all problems affecting the world on a global scale, Ölçer said, "During such times, many great artworks were created to express the suffering of humankind and to express the hope that similar experience may never repeat itself."

"The yearning for going back to point zero, and start afresh, will be with us also in the future, as it was in the past," he added.

Noting that undoubtedly, the impact of the COVID-19 pandemic, which has brought the whole world to a standstill, will be observed in many areas in the future, Ölçer said: "The...