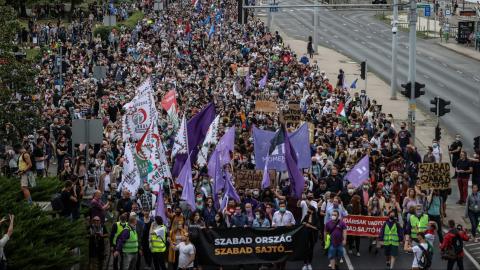 About 90 of the Index journalists resigned en masse following the sacking of editor-in-chief Szabolcs Dull. In the lead-up to his dismissal, Dull had been warning that the independence of the editorial team was in danger and he moved the "freedom barometer" on the homepage of Index to "in danger".

The journalist resignations made the news around the world and thousands of people took to the streets of Budapest to demand a free press and a 'new Index'.

"It was a critical situation, and I tried to keep a cool head," says Munk, who was Index's deputy editor-in-chief and now leads Telex as co-editor. "I felt responsible for the team and all I knew was that we wanted to stay together. But on the other hand, I remember I felt an immense sadness and weariness - I didn't even go to the demos because I was so tired."

Munk has been a journalist all her adult life. She was at Index for 18 years, working her way up from intern to deputy editor-in-chief, and witnessed how the ruling Fidesz party has gradually assumed control over the bastions of Hungary's independent press since it came to power in 2010. Using a mix of restrictive media laws and deep-pocketed friendly oligarchs, the party has seized control of major television and radio stations, news portals, and print media publishers, to the point where independent analysis this year showed that Orban allies exert control over a majority of the country's 88 most influential media outlets.

Index had fended off repeated attempts by government-allied oligarchs to influence its content. But after the municipal elections in 2019, when the Hungarian opposition scored some unexpected victories, most notably in Budapest, the Fidesz leadership reportedly decided to increase the pressure on Index, to mute...