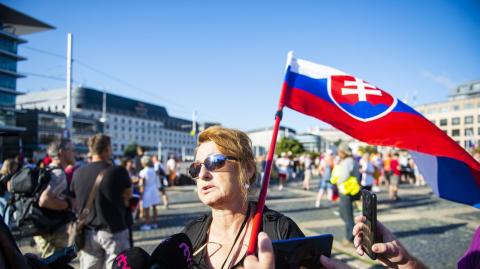 The predominantly anti-vax protesters received onsite support and words of encouragement from several opposition politicians, including far-right leader Marian Kotleba from the People's Party - Our Slovakia (LSNS). He oversaw the demonstration with MPs from the leftist SMER-SD party, prompting talk of future cooperation between the two parties.

The proposed measures by the government were aimed at exempting fully vaccinated people from mandatory testing during the impending third wave of the pandemic. As the number of people infected with the Delta strain grows by the day, such an exemption would have allowed vaccinated Slovaks to enter certain premises, such as shops and restaurants, without a mandatory test when presenting a valid EU Digital Covid Pass, the Slovak Spectator informed. Partially or unvaccinated people would, however, be obliged to undergo regular testing under the legislative proposal.

In the end, MPs gave into some of the protesters' demands and reached a compromise that promised the unvaccinated free tests in case the pandemic got worse in the country. So-called "pendlers" or cross-border commuters, who cross the Slovak border every day for work, were also promised free-of-charge testing after a string of organised blockades paralysed a number of border crossings.

It was a small victory for anti-vaxxers as well as Parliamentary Speaker Boris Kollar from the Sme Rodina party, who has long opposed dividing people based on their vaccination status.  He called the tussle in front of the parliament a "fatal failure" of the police and decried the escalation of the conflict. "Those people, obviously, are fighting against something - that does not mean we should beat them with batons or spray them with water cannons or with tear gas...