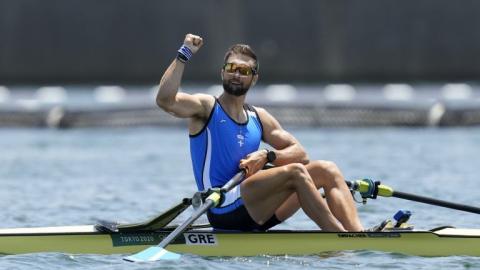 Ntouskos pulled a surprise victory in the men's single sculls with a time of 6min 40.45sec, breaking the previous record of Mahe Drysdale of New Zealand (6:40:45 in the 2016 Rio di Janeiro Olympics) and defeating two time world champion Kjetil Borch.

"I don't believe it. I really don't. It was the best course, really. The weather helped me a lot. I felt extremely well during the course. My coach told me I should get a medal, to be in the top three. Between the 650th to 800th metre, I made a change and I didn't believe I'd endure, but I very much wanted to win a medal. I never believed I'd get the gold," Ntouskos said.

«Many congratulations to Stefanos Ntouskos! An Olympics gold medal winner and an Olympics record, truly an enormous success. He filled us with joy and pride,» the PM wrote.

It was Greece's first medal in the Tokyo Olympics, and Greece's fourth ever Olympics rowing medal.

The 24-year-old Ntouskos, a native of Ioannina, in the first 500 metres of the row was in fourth place but then picked up speed in the last kilometre.

In the 2016 Rio di Janeiro Olympics in the men's lightweight coxless four, Ntouskos had finished in sixth place,