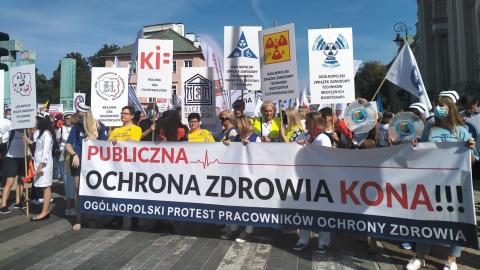 Polish medical workers have been in conflict with the government for years, beginning in 2017 when a residents' hunger strike forced the government to make concessions. But the promises have not been kept, these frontline staff argue, pushing them back onto the streets. Photo: BIRN. When resident doctors - qualified physicians undergoing postgraduate training on the job - first began protesting in 2017, government spending on healthcare was around 4.5 per cent of GDP, well below the EU average of 7.5 per cent. Increases in spending since have fallen short of demands for spending to rise to at least 6.8 per cent of GDP. Like elsewhere in Central Europe, Polish medical workers often feel forced to leave the profession or work abroad. Staff shortages are particularly acute amongst nurses, whose average age is 53. Photo: BIRN Medical staff are severely overworked, with the Residents Union claiming the average working time for doctors is 300-350 hours per week, twice the number of hours of a full-time position. The situation is even worse among ambulance workers, some of whom say they reach even 500 hours monthly. In August, a 39-year-old anesthesiologist from Walbrzych died, with coroners looking into whether overwork was the cause of death. Photo: BIRN Reacting to the doctors' demands, Health Minister Adam Niedzielski said last week that satisfying them all would be like "launching a rocket and flying to Mars". He claimed the salary hikes and other measures requested by medical workers were almost as expensive as the entire 2022 budget for health. Photo: BIRN