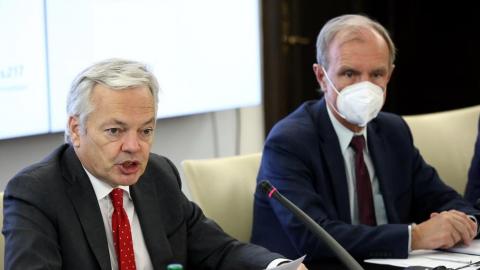 Although, officially, the letter is not the first stage of this procedure to withhold EU funds, most experts regard it as such: if the governments fail to provide adequate answers to the Commission's questions, a suspension of EU funds will be a step closer.

Hungary's independent media are taking it for granted that the country will not receive its first tranche of its money from the EU's 750-billion-euro coronavirus recovery fund this year, and it can't be ruled out now that the money will still be on hold when the next parliamentary election takes place in April 2022.

Judging from the questions, it seems quite clear that the Commission has done its homework and is targeting the Achilles' heel of the system set up by Viktor Orban's government: a lack of transparency and competition in public procurements, where half the tenders result in a procedure containing a single bidder. Beneficiaries of the EU's agricultural and regional development funds are also suspiciously close to the government.

In addition, the letter refers to the surprisingly high number of projects that Hungary has had to withdraw from EU funding when OLAF, the EU's antifraud office, found irregularities, but anyway continued to finance from the national budget. The Commission regards that as having a "negative impact on the deterrent effect of Commission controls and audits, and of OLAF investigations."

One of those projects criticised by the OLAF was linked to Orban's son-in-law, Istvan Tiborcz, whose ELIOS company won a number of public procurements for city lighting projects between 2011 and 2015, worth altogether 40 million euros, financed by EU funds. When OLAF in 2018, after two years of investigation, found serious irregularities, Hungary had to return the...