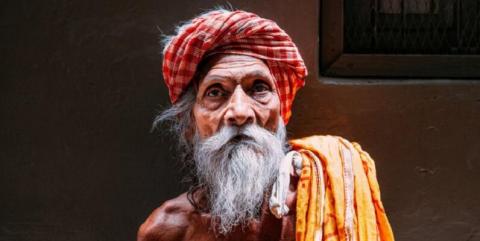 Rızacan Kumaş, a Turkish photographer who seeks a story in all his works, is in the pursuit of reality, reflecting onto its perfect moment to help the viewer to understand what is going on in the real scenery that he has captured.

His work "Panoramic Portraits" was exhibited at the Natively Digital auction between Oct. 14 and 21 by Sotheby's, one of the most respected auction houses in the world.

With the "Panoramic Portraits," purchased by world-famous collector Pransky and offered for sale at Sotheby's, Kumaş became the first Turkish photographer to have NFT works featured on this prestigious platform.

According to the photographer, NFT is the next generation for the creation of art. As a photographer, who follows stories of people around the world, such as Vietnam, China, Malaysia and Singapore, he is following the feelings of people.

Kumaş's overseas travels started in 2017 for the "Crossing the Silk Road" project, and he took many interesting photographs.

Kumaş, who also made projects such as "Shiite Muslims," "Afghan Basti Refugee Camp," "Gay Bar in Thailand" and "Buddhist Monastery School and Orphanage" has attracted the attention of NFT collectors as he brought his frames to digital platforms such as SuperRare, OpenSea, Foundation and MakersPlace.

"When I am taking photographs, the only thing that is working is my machine, and I try to shut down my emotions," Kumaş said.

"I was always in search of stories behind the scenes, and when I felt the story is there to capture, I start to work," he added.

According to the photographer, NFT is a new era for photography. In fact, not only photography but for all the people dealing with arts. "We do not need a gallery to reach the collector, or we do not need a...