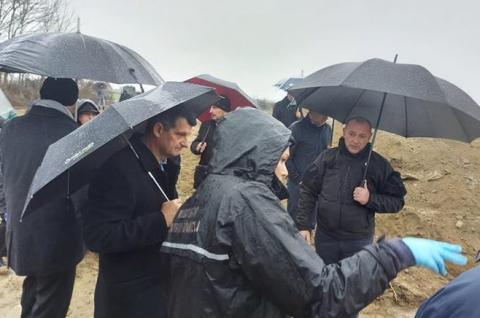 The Croatian Veterans' Ministry told BIRN that preliminary findings show that human remains discovered at an illegal landfill between the villages of Pacetin and Bobota near Vukovar are those of at least ten people who were middle-aged or older.

"We will know more details when the remains are analysed at the Department for Forensic Medicine in Zagreb where the remains will be taken for further analysis, as well as DNA analysis after the exhumation," the Veterans' Ministry said in a written response.

Human remains were initially found at the landfill on November 25, and an additional search revealed more.

Vukovar was besieged for three months by the Yugoslav People's Army and Serb paramilitaries before it fell in November 1991. Over 3,000 soldiers and civilians died during the siege and its aftermath, 86 of them children.

War Veterans' Minister Tomo Medved visited the site last week and said that in the last five years, Croatia has made significant progress in searching for missing persons from the war.

"The Croatian government and the Veterans' Ministry will never grow tired of searching for missing persons, that is a priority for us," Medved said.

He again called on Serbia to disclose information about the whereabouts of undiscovered graves.

According to the War Veterans' Ministry, Croatia is still looking for 1,853 people who disappeared during the conflict in the Homeland War, 520 of which are from the Vukovar-Srijem County and 386 from Vukovar.

Medved said that since 2016, a total of 99 possible mass grave and individual grave sites have been investigated in Vukovar-Srijem County. The remains of 18 people have been found, and 16 of them have been identified.

In May this year, five people who had...