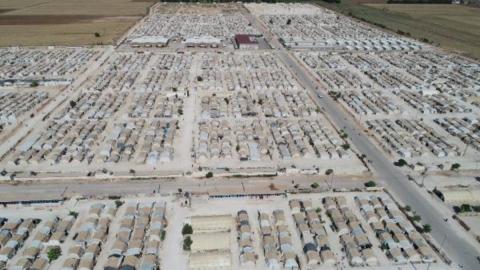 The EU has allocated an additional 325 million euros to extend the Emergency Social Safety Net (ESSN) program until early 2023, the European Commission has announced.

The ESSN provides more than 1.5 million refugees in Turkey with monthly cash transfers to cover their essential needs.
It is the biggest humanitarian programme in the history of the EU, and the world's biggest humanitarian cash assistance programme, it added in a statement issued on Dec. 2.

Vulnerable refugees in Turkey have now been able to rely on our humanitarian assistance for more than five years, and we will not let them down," Commissioner for Crisis Management Janez Lenarcic said during his visit to Ankara on Dec. 2.

"Thanks to the funds announced today, the EU will continue the ESSN programme until early 2023. This support is a critical lifeline for hundred thousands of families, many of whom have been especially hard hit by the coronavirus pandemic."
This is a major achievement for the EU, for our humanitarian partners and the government of Turkey," he added.

The ESSN programme provides vulnerable registered refugees with monthly cash transfers onto an electronic debit card. It helps them pay for what they need most, such as rent, transport, bills, food and medicine.

The funding announced on Dec. 2 is part of the 3 billion euros package to support refugees in Turkey announced by President von der Leyen following the European Council of in June this year.

Turkey hosts the largest number of refugees worldwide - 4 million people. Some 3.7 million of them are Syrians who fled the ongoing conflict in their country. The vast majority of refugees in Turkey live outside camps.