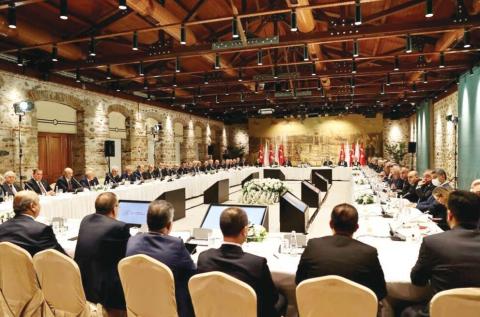 Treasury and Finance Minister Nureddin Nebati has said he had a "fruitful" meeting with the representatives of the business world in Istanbul.

"We held a productive meeting today with our representatives from the business world, the real sector and [nongovernmental organizations] NGOs," Nebati wrote on his Twitter account on Dec. 11 after the meeting.

"In the coming period, we will act with an understanding based on consultation, and we will continue to take the steps that will lead our country to success," he added.

Nebati informed the attendees of the government's new economic model, according to media reports.

He also assured the business world that the government would continue to stick to free-market values and support businesses.

"It was a constructive meeting," TOBB head Rifat Hisarcıklıoğlu told reporters after the meeting.

"The minister briefed us on the current outlook and the new economic program. A lot of issues including the raw material price hikes, payments to medical firms, claims of public contract holders and value-added tax returns were discussed," he added.

"Maybe everything is not alright in our country, but production continues uninterruptedly and supply chains have never been broken. Exports are good, the banking...