All News on Politics in Serbia

The US special envoy to the stalled Kosovo-Serbia dialogue, Richard Grenell, said on Twitter on Friday that a meeting between Kosovo and Serbia would take place in Washington on September 2.

"We are happy to announce that the leaders of Kosovo and Serbia will meet at the White House for a negotiation on September 2″, Grenell tweeted without providing further details.

"Serbia is not in a position, but it would not be good if it was in a position to reject the talks. Why Grenell used the term 'negotiations' is a question for him. We participate in the talks, the topics are economic, it is important for us and they are good topics ", Vui says.

"We are happy to announce that the leaders of Kosovo and Serbia will meet at the White House for a negotiation on September 2", Grenell wrote on his Twitter account.
Grenell did not give more details.

We are happy to announce that the leaders of Kosovo and Serbia will meet at the White House for a negotiation on September 2. @realDonaldTrump @robertcobrien @WHNSC

The government and the opposition accuse each other, moving the political struggle from institutions to the individual level.

Thus, politics is reduced to personal confrontations between politicians, instead of discussions about ideas and political programmes. In such clashes, the citizens who do not see a political option that can articulate their dissatisfaction are most at a loss.

Deputies of the Self-Determination movement Vetvendosje and deputies of the Democratic Alliance of Kosovo did not vote today for the Draft Law on Protection of KLA War Values, Kosovo online reports.
Only 35 deputies voted in favor of the law, while one was against.

"It will be discussed today and tomorrow, the decision has not been made yet. It is motivated by the need to protect the country when it comes to epidemiological reasons," he says, adding that the government will discuss it today, and that it will be a topic of tomorrow's Crisis Staff meeting. 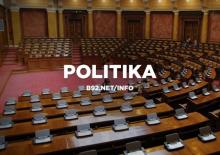 If the president of Serbia and the Serbian Progressive Party, Aleksandar Vucic, decides to form a new government without the Socialists, it will not only greatly weaken the SPS, but will also jeopardize Ivica Dacic's position as the head of the party, "Danas" sources from the Serbian political scene claim.

A lack of political consensus in Kosovo on its talks with Serbia is hurting prospects of a deal being reached that would settle relations between the two.

"I have a vague idea who will occupy ministerial seats, but I am not certain yet. I will discuss things with some people who entered the National Assembly. Next week I expect a session of the SNS presidency, and we'll go slowly from there.

He commented on the upcoming meeting in Washington, scheduled for June 27.
"I don't know what the topic will be, or which delegation will go. I expect a rational conversation. Serbia is small to command the White House, but big enough to emphasize its interests," he said.
He once again denied allegations that Serbia would recognize Kosovo on the eve of Vidovdan.

The current government in Serbia began its mandate in 2016 with Aleksandar Vucic as prime minister.

After taking office, in their speeches to parliament, the two of them made a total of 99 pledges.

Both the EU and the US opposed tariffs on the grounds that they are an obstacle to the resumption of Kosovo-Serbia dialogue. For the first time in decades, Kosovo found itself on the receiving end of international criticism, with the West effectively succumbing to Serbia's demand for an unconditional lifting of the tariffs as a condition to resume the dialogue.

"I am ashamed to even answer to the question whether Serbia will recognize Kosovo on the eve of Vidovdan. I am ashamed, because it says more about them. It will never be on our agenda. It speaks about what others have done," he said.
He pointed out that we are facing a difficult period, which will commence with the arrival of Miroslav Lajcak.