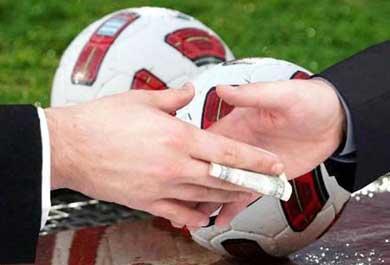 Match-fixing is a «major problem» in Greece where 12.8 percent of players interviewed in a recent survey said they had been approached and asked to manipulate a game in the last year.

The survey, conducted by Birbeck, University of London on behalf of the world players' union FIFPro, said it was also a major problem in Italy, although the number of cases that have been exposed may have been a sign of willingness to tackle the problem.

Footballers in England, meanwhile, said they did not believe that match-fixing had affected the game. None of those questioned said they had been approached to fix a match in the last year or had any reason to believe that any matches in their league had been manipulated during that period.

Around 1,500 first and second division players in England, Scotland, Greece, Slovenia, Finland, Italy, Hungary and Romania were interviewed in the survey as part of FIFPro's «Don't Fix it» campaign.

The campaign was started in 2012 to educate players about match-fixing and tackle the causes which lead them to accepting offers to get involved.

In Greece, 29 players, or 13.7 percent of those interviewed, said they had played in matches which had been fixed, with nine of those saying they were suspicious at the time, and 12.8 percent had been approached in the last year.

Sixty-four percent said they had reason to believe that games in their league had been fixed in the last year...

Global call for ‘free COVID-19 vaccine for all’

Economies of Bulgaria, Romania and Finland with a Growth of 0.3 Percent

Eurostat: Only 0,5% of Bulgarians Work from Home