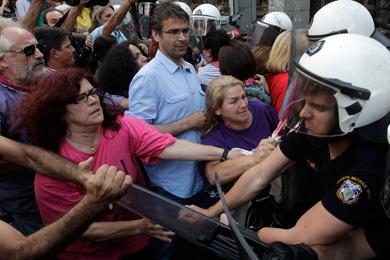 One police officer was suspended on Friday for punching a sacked Finance Ministry cleaner on the head and another was being investigated for wearing non-issue toughened gloves normally worn by motorcycle riders.

I will not accept behavior that damages the standing of the Greek Police and undermines trust between citizens and police officers, said Public Order Minister Vassilis Kikilias after the actions against the two officers, who were involved in confrontations with the sacked workers outside the Finance Ministry on Thursday, were announced.

New Democracy spokesperson Anna Asimakopoulou said she felt disgust about the incidents involving the police officers. Reporters Without Borders said that two journalists, photographers Tatiana Bolari and Marios Lolos, were beaten by police during the scuffles. Both required hospital treatment.

The 397 sacked cleaners said Friday that they would turn to the European courts to force the government to abide by a Court of First Instance ruling calling for them to be rehired.

The ministry has appealed the decision at the Supreme Court.