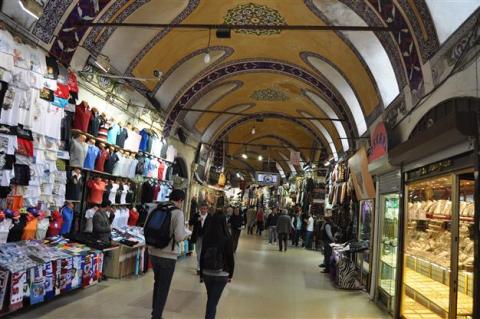 An Istanbul district municipality responsible for the area that includes the historic Grand Bazaar wants a say in the management of the market, which has been controlled by its craftsmen for around 555 years, as part of a renewal plan, daily Cumhuriyet has reported.

The draft project, according to an alderman from the main opposition Republican People's Party (CHP), suggests that the Fatih Municipality, headed by the ruling Justice and Development Party (AKP), will hold the right to approve or dismiss every decision made by the board of the Grand Bazaar Craftsmen Association, the current authority.

"The Fatih Municipality is only doing this for more benefits," Cumhuriyet quoted alderman Soner Özimer as saying on Jan. 12.

"The municipality is imposing this on us," said Seçkin Ar?ca, a board member of the association. "Our existing management will become meaningless. We want the municipality to act only as an auditor."

The preliminary project was approved at the municipality's January meeting despite the oppositional votes by the CHP members of the city council.

According to the plan, in addition to the renewal efforts, the municipality will send four members to the 11-member board. The draft also suggests that no say should be given to craftsmen who do not own stores at the site but only pay rent.

Ar?ca said this would remove all authority from them, as decisions would require municipality approval.

The priority at the bazaar should remain in the hands of craftsmen, according to fellow worker Zafer Sar?altun. "This was how it worked during the Ottoman era," he added.

Nevertheless, both Özimer and Ar?ca agree that the Grand Bazaar must be renewed.