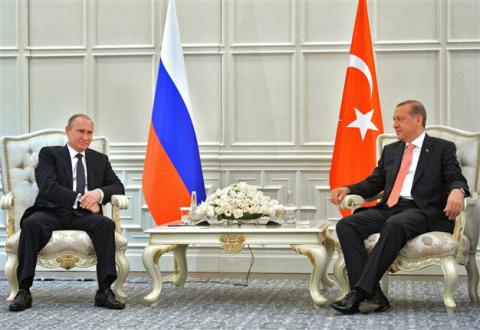 During a recent meeting with Russian President Vladimir Putin, President Recep Tayyip Erdo?an delivered a report about human rights violations against Crimean Tatars, drafted by an unofficial Turkish delegation who visited the region.

The report prepared after the unofficial visit to the peninsula ?lays out that many human rights violations, acts of  oppression and suppression continue and [are] systematically practiced? towards Crimean Tatars,  Foreign Ministry spokesperson Tanju Bilgiç told reporters on June 18.

The report also underlines that Russia has not kept its promises, Bilgiç said.

Turkey is ready to give all means of support to Crimean Tatars, he said, noting that Ankara pledged $10 million to Ukraine, which will also be provided for Crimea.

The report also stressed the issue of citizenship was among the most important problems of Crimean Tatars.

According to the report, the minority is forced to become Russian citizens, while their freedom of speech, language, education, residence and access to fair trial have been widely disrupted by Russia.

Following Russian annexation of Crimea, only a few numbers of foreigners have been allowed to stay in the peninsula.

Although Crimean Tatar language was accepted as an official language along with Russian and Ukrainian, it is yet to be practiced in daily life. There are only 15 schools providing training in Crimean Tatar, which is not enough for the whole population, according to the report.

The report also pointed to the pressure on Crimean Tatar...