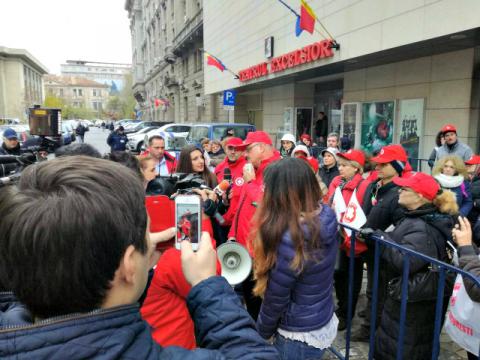 Public-sector employees from institutions across Romania protested on Tuesday demanding better wages ahead of parliamentary elections next month, with some unions threatening strikes in December if demands are not met.

The protests come after parties in parliament voted to raise salaries for educational and healthcare workers, despite warnings from the government and the National Bank.

However, the two main parties, the Liberals and Social Democrats, have not agreed on whether to adopt the bill raising pay before the December 11 elections, or leave it for the next assembly to deal with.

The co-chair of the Liberals in parliament, Alina Gorghiu, called on the Social Democrats to organize an extraordinary session of parliament to vote on the law.

But the head of the Social Democrats, Liviu Dragnea, refused the request, saying that his MPs could not properly evaluate a law in just a few days.

Protesters have been galvanised by the pay rises awarded in August to public-sector workers in parliament, the presidential administration, ministries and the audit court.

Sebastian Oprescu, head of the public servants' union, said the protests were intended to put pressure on the government to eliminate the current discrimination in pay and apply the same criteria to salaries across the public sector.

He warned said that if MPs do not meet their promise to raise public-sector wages before December 1, some sectors will go on strike.

Protesters gathered on Tuesday in Bucharest in front of several state institutions, including employees of the National Consumer Protection Authority, ANPC, demanding the same treatment as the public servants whose wages increased in August.

"We get the lowest wages in the public sector," Iulia...