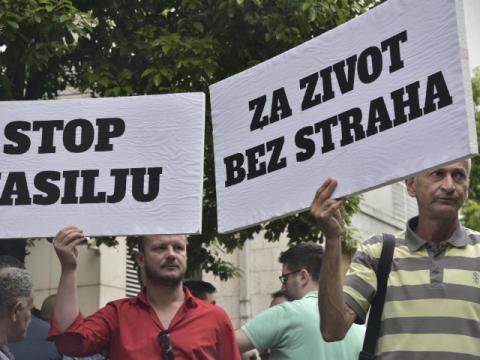 The OSCE South east Europe Media Conference, meeting in Struga, Macedonia, on Thursday adopted a declaration condemning the attack on Montenegrin Vijesti journalist Olivera Lakic, and called on the authorities in Montenegro to ensure that the investigation is independent, effective and speedy and that the perpetrators, including its masterminds, are brought to justice.

"Politicians and public officials should not create a hostile environment for the media through their statements and actions. They must demonstrate a higher level of tolerance for critical journalism and support a plurality of voices and opinions in a society," the declaration said.

Lakic was shot in the leg on Tuesday in front of her home in Podgorica.

This was not the first time she has been attacked. In 2012, a man in a black tracksuit struck her, also in front of the building where she lives.

The attack followed a series of threats she had been receiving since she wrote a series of articles about the Tara cigarette factory and the Montenegrin Tobacco Company in 2011.

Hundreds of journalists and NGO activists protested on Wednesday in front of the Montenegrin government in Podgorica against the attack on Lakic.

Montenegrin officials, party leaders, the media, NGOs and representatives of international organizations in the country reacted to the attack by urging the prosecution and police to investigate the matter and bring the perpetrators to justice.

Montenegro has long suffered from gang violence linked to drugs and cigarette smuggling routes, prompting allegations that government officials are complicit with, or even linked to, these activities.

Western governments are often accused of turning a blind eye to oganised crime in the...