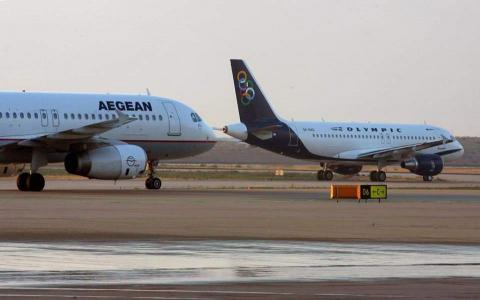 Greece's largest carrier Aegean Airlines will proceed with a sale of bonds on March 5-7 to raise up to 200 million euros ($226.86 million) for down payments on new Airbus aircraft and the construction of a new pilot training centre.
According to the public offering prospectus, about 30 percent of the issue will be allocated to retail investors, while 70 percent will go to "qualified investors".
The seven-year bonds, each with a nominal value of 1,000 euros, will pay a semi-annual coupon. In Greece interest payments are taxed at 15 percent. Trading of the bonds on the Athens stock exchange will start on March 13.
Pricing will be determined via book building.
Aegean, a member of the Star Alliance airline group, will use 75 percent of the proceeds to partly finance down payments on new aircraft based on a deal with Airbus to renew its fleet of single-aisle planes...