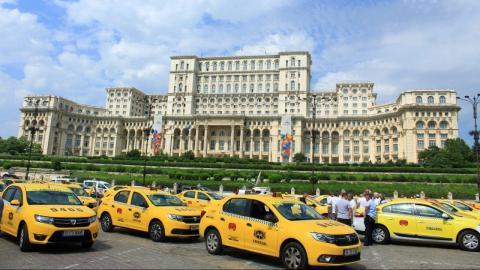 Taxi drivers protested on Tuesday at a rally in Bucharest called by the Confederation of Authorised Operators and Transporters, COTAR, which accuses digital transportation services like Uber, Bolt and Clever of "lobbying" the government into passing legislation that "will generate serious and illegal discrimination".

"[The authorities] want to regulate this sector with two different laws: one for the yellow, marked cars, that requires taxi drivers to respect many rules and to pay many taxes, and another one for anyone who wants to carry out the same activity without any restriction," COTAR said in a statement quoted in Romanian media.

Several taxi drivers gathered by the parliament building complained that the government is condoning a form of tax evasion when planning to end the ban on services like Uber.

"In Germany, in Austria, they have rejected them [platforms like Uber] because they refuse to install cash registers in their cars," said Ionut Oancea, who sees such digital services as a way to avoid paying taxes and following regulations that are imposed on ordinary taxis and their drivers.

"[Turkish President Recep Tayyip] Erdogan has chased them off, and so has [Prime Minister Viktor] Orban in Hungary," said taxi driver Ilie Adrian.

As well as listening to their leaders' speeches, the drivers played to popular political songs urging Romanians to "wake up" and stand up for their rights.

As the rally started, an Uber driver operating illegally told BIRN he only wants to be able to work in the same conditions as those who drive the yellow, marked cars.

"I have a transportation company with my son, who works with [transportation application] Black Cab. We are a registered company and pay taxes like everyone else, and...