Tensions Rise in Albania Ahead of Disputed Elections 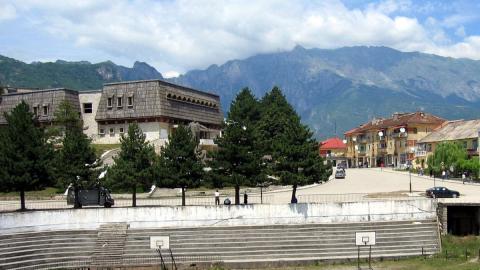 In the northern city of Shkodra, a school serving as a voting centre was damaged by fire following an opposition attack.

Police said they had arrested seven people while five more were on the run following the attack in Bajram Curri.

Police were seen stationed near the regional election administration centres in several municipalities run by opposition parties, which are boycotting the elections and which President Ilir Meta has cancelled.

The ruling Socialist-controlled parliament has, however, declared President Meta's decree null, and insists that the local elections must go ahead.

On Wednesday, protesters and municipal workers in Kavaja, in central Albania, confronted police stationed at the local electoral centre and called on the Central Election Administration, the CEC, to vacate the building by 4pm on Wednesday.

The same stand-off occurred in the southern towns of Berat and Gjirokastra, where mayors belong to the Socialist Movement for Integration, which used to be in alliance with Prime Minister Edi Rama and the Socialists but is now in opposition.

Polling stations and voting centres are usually situated in schools and kindergartens in Albania and such buildings are nominally under the control of municipalities. About half of the 61 municipalities in the country are controlled by opposition mayors, who are using their positions to deny the Socialists a normal election.