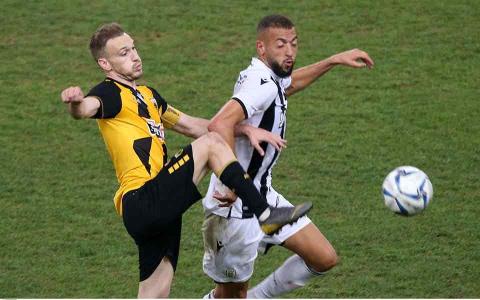 AEK and PAOK shared a 2-2 draw in a thrilling derby at the Olympic Stadium of Athens on Sunday night, that allowed Olympiakos to go it alone on top of the Super League table.

PAOK led twice in the game, both goals coming from Karol Swiderski, but AEK managed to respond, first with Dmytro Chygrynskiy and then with Milos Deletic, forcing the champion's second consecutive 2-2 draw in the Super League.

The match played on front of some 35,000 AEK fans also had a missed penalty by PAOK's Diego Biseswar and a goal by AEK's Petros Mantalos correctly disallowed by the video assistant referee as offside.

Olympiakos had Youssef El-Arabi to thank for his brace in the Reds' 2-0 home win over Lamia on Saturday, just three days before its Champions League encounter with Red Star in Belgrade.

The Piraeus team has 13 points from five games, while Xanthi is second on 12,...