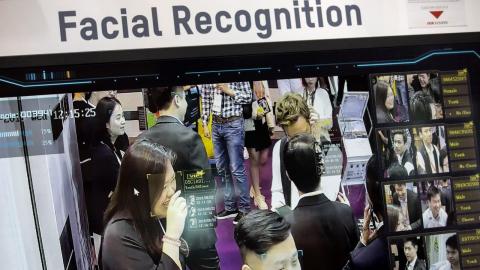 The toppling of surveillance towers provides a disturbing snapshot of the possible future of anti-government demonstrations, as states enlist the growing power of human identification technologies to track citizens and their behaviour.

In the West, too, a growing number of artists, intellectuals and activists are pushing back and channelling their creativity against the growing use of Big Brother-type technologies.

Scott Urban is one of them, an American who since 2005 has been making custom wood eyewear.

"I thought that being an eyeglasses creator, I could make an impact to protect people's privacy with something as simple as a pair of sunglasses," Urban told BIRN in an email interview.

In 2016, Urban created the Reflectacles Ghost, a model that, according to Urban, "reflects both visible and infrared light to obscure the wearer's face on cameras using infrared for illumination, as well as blocking the face to cameras using a flash."

But while Hong Kong's rebellious youth is concerned with China's surveillance state, artists like Urban say they are more worried by private companies selling facial recognition technologies rather than states like China imposing it on their citizens.

In her 2019 book The Age of Surveillance Capitalism, American author and scholar Shoshana Zuboff writes that a substantial part of the material collected by facial recognition systems and other data gathering technologies is "fed into advanced manufacturing processes known as 'machine intelligence', and fabricated into prediction products...