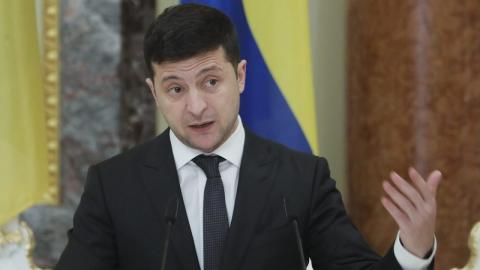 Ukraine's ambassador to Romania, Oleksandr Bankov, has blamed a controversy over words attributed to the Ukrainian President about the Northern Bukovina region on a mistranslation.

President Volodymyr Zelensky was quoted as saying that the region, which formed part of Romania between the two world wars but is now in Ukraine, was "occupied by the Romanians" in 1919.

"Few Romanians have seen the Ukrainian President's original declaration in Ukrainian. Instead, they have taken the English translation, where the original sentence … 'Bukovina was taken by Romanians' was translated as …'occupied by Romanians'," Bankov wrote on Facebook on Thursday.

"Those interested can easily verify this in the original video," Bankov added in a post, in which he acknowledged connotations of illegitimacy in the term "occupy" and voiced "sincere regret" over the controversy caused by the inaccurate translation.

Zelensky made the disputed comments on Wednesday during a speech marking Ukraine's Day of National Unity.

Many Romanian media outlets reproduced his alleged words, which caused anger in some circles. Romania's Foreign Ministry on Thursday asked Ukraine to clarify the statement and expressed "surprise" about the reported remarks, which it said "make evident the need for a correct understanding of history".

Romania also stressed the need to protect the rights of ethnic Romanians who still live in Northern Bukovina, following the adoption this month in Ukraine of a new education law that Bucharest sees as potentially undermining the right of members of the community to be educated in Romanian.

Situated in southwest Ukraine, ethnically mixed Northern Bukovina was part of the Romanian principality of Moldova until 1775, when the Austrian...