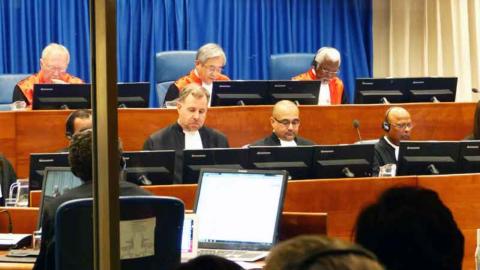 The Association of Defence Counsel Practising Before the International Courts and Tribunals urged the UN's Mechanism for International Criminal Tribunals in The Hague on Friday to free elderly war crime convicts to help ensure that they are not infected with the COVID-19 virus.

"All detainees currently serving their sentences in Europe and in Benin are older detainees and therefore particularly vulnerable. If they contract COVID-19 while in detention, their lives are at risk," said the statement.

The lawyers' appeal cited the UN High Commissioner for Human Rights, Michelle Bachelet, who has urged governments to "release those particularly vulnerable to COVID-19, among them older detainees and those who are sick, as well as low-risk offenders".

Convicts currently in detention include former Bosnian Serb political leader Radovan Karadzic, who was sentenced to life in prison last year for genocide and other wartime crimes.

Ongoing war crime proceedings in the Hague trial of former Serbian State Security Service officials Jovica Stanisic and Franko Simatovic have already been suspended, while appeals hearings in the case against former Bosnian Serb military chief Ratko Mladic have been postponed due to his poor health.

Confirmed: A Bulgarian Citizen is among the Seamen Abducted near Benin

Greek ship targeted by pirates off Guinea; one crew missing

CNN: Oil Tanker with 22 Aboard Missing Off Coast of West Africa

These are the Last Places on Earth Without Internet

These are the least travelled destinations for Brits (photos)