What are the chances, huh? 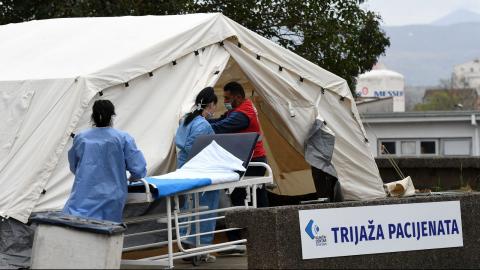 I could bring up baksuz now. This old word from the Turkish language translates as jinx or bad luck, but it is much more personal. It's like an Irish leprechaun made of anti-matter, crafted in the collective unconscious of the Balkans as an explanation of the inexplicable or an excuse for bad choices.

I've had my fair share of baksuz. On a one-day school trip in fourth grade, only I got attacked by jellyfish. Literally the worst basketball player in the class. I broke my arm on court. Just Google Bad Luck Brian and you'll get the point. That is why with all of the "hang in there" and "you got this", I also got a lot of polite: "I knew this would happen to you"

The thing is, you know it and I know it - this has nothing to do with bad luck. This was a case of me and some other people taking chances when and where we should have not.

I got infected when an old lady in the room next to mine asked me to fix her phone so she could call her kids. She knocked on the door, I fixed her wi-fi; it lasted about two minutes.

On the last day of the quarantine they told us she and her brother had tested positive.

I wish I could blame it all on innate chivalry and the goodness of my heart, but truth is that I wasn't scared when she asked me to help her. It was the end of the quarantine, days without any symptoms, I wasn't thinking that I was taking big chances with my health.

Those people in quarantine, not even with the threat to their own health and...