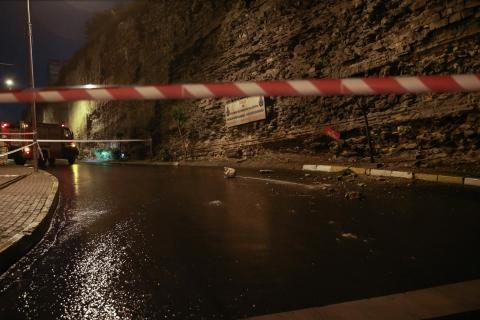 Heavy rains on June 14 caused some rocks at Istanbul's historical walls to collapse in Fatih district, damaging vehicles passing by them, with no casualties.

Police, firefighters and municipal teams were sent to the area upon notification after the rocks of the 1,600-year-old walls in the city's peninsula collapsed onto two cars.

Municipal teams started to clean the stones while firefighters pulled lanes and closed the street to traffic.

Puddles formed on the streets due to the downpour, which continued throughout the night.

Initially commissioned to be built by Constantine the Great in the 5th century A.D., Istanbul's ancient walls took their final form with adjustments conducted over time.

The elaborate system of double walls and tunnels saved Constantinople, as the city was known then, and the Byzantine Empire with it from sieges.

Many portions of the ancient walls still stand while other sections have crumbled.