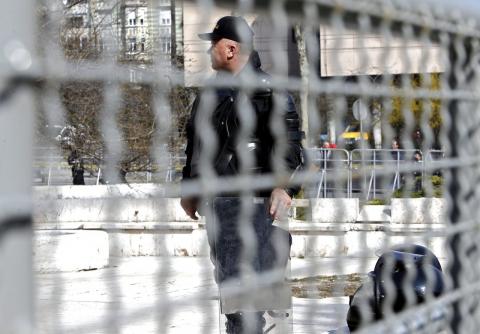 Bosnia and Herzegovina's border police on Saturday arrested Mladen Grujic, who is sought by neighbouring Croatia for war crimes committed against Croatian prisoners of war in its western Slavonia region during 1991.

"Border checks established that Interpol in Zagreb had issued a warrant for his arrest for the criminal offence of 'war crimes against prisoners of war'," Bosnia's border police wrote in Monday's report, not fully revealing the identity of the suspect, only the initials and year of birth.

According to the police, M.G., who has citizenship of both Serbia and Croatia, was handed over to the local court.

Local media reported that the court should decide on his extradition to Croatia and that, since he is not a citizen of Bosnia, there are no formal obstacles to extradition.

The Bjelovar County State Attorney's Office in Croatia indicted Grujic and 27 others, many of them members of Serbian paramilitary forces, in 1997.

The indictment covers 12 different crimes committed in western Slavonia from August to December 1991 at a time when Serbian paramilitaries were taking over large parts of Croatia - mostly, but not always, Serb-majority areas.

They were charged with unlawfully taking into custody Croatian civilians and soldiers, and then taking them to prisons run by Serbian paramilitaries where they were abused, tortured and killed. At the time, none of the accused was available to the Croatian justice system.

According to the indictment, Grujic and several co-accused men "tortured and killed prisoners of war, violating the rules of international law".

Years later, in August 2010, one the 28 indicted, Dragomir Casic, a former member of Serbian Territorial Defence forces, was arrested at the Batrovci...