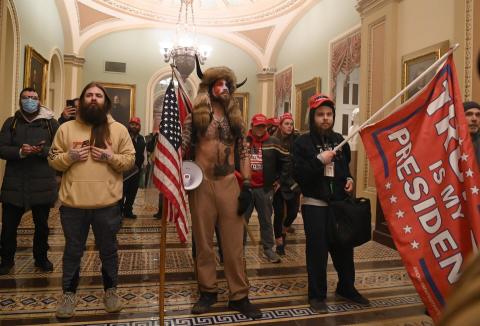 Previously unseen videos showed the view from inside the Capitol as rioters smashed windows and fought with police on Jan. 6, coming within 100 feet (30 m) of the room where Pence was sheltering with his family. The mob had set up a gallows outside.

The footage, which also included body-camera views of brutal attacks on Capitol police, showed Pence and lawmakers being hustled to safety steps ahead of an advancing mob that stormed the building, resulting in the death of five people, including a police officer.

The House of Representatives has charged Trump, a Republican, with inciting an insurrection by exhorting thousands of supporters to march on the Capitol on the day Congress was gathered to certify Democrat Joe Biden's electoral victory.

Trump's lawyers argue his rhetoric is protected by the First Amendment's guarantee of free speech and that the trial is politically motivated.

Conviction, while unlikely in the closely divided Senate, could lead to a vote to bar Trump from running for office again

The video footage highlighted the fact that hundreds of Trump supporters who attacked the building in an attempt to stop the peaceful transfer of power targeted Republicans - whose votes would be needed to convict Trump.

House managers prosecuting the case frequently highlighted the threat to Pence. Trump had repeatedly said Pence had the power to stop the certification of the election results, even though he did not.

"The mob was looking for Vice...