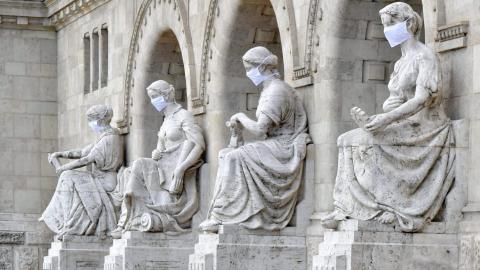 This conversion of universities from public institutions to privately managed entities involves handing over at least 600 million forints (1.7 million euros) in starter capital in cash or in-kind contributions (movable assets, real estate or intellectual property) or a combination of both, which will lay the ground for them to operate as non-profit institutions in the future.

Like most policies devised and implemented by Prime Minister Orban's government, there is the stated aim - in this case to modernise, improve standards and financially secure the future of Hungary's universities; and then there is an underlying strategy, which typically looks to increase and entrench the power of the ruling Fidesz party over the country's economy and society, even should it lose the next elections in 2022.

And its offers are not normally ones that can be refused.

Indeed, the University of Debrecen (home to 25,000 students) - which in 2017 awarded Russian President Vladimir Putin the honorary title Civis Honoris Causa, only three years after his annexation of Crimea - was the first to voluntarily sign up for privatisation, claiming to have the full backing of both staff and students. The University of Szeged (22,000 students) followed next after some internal debate and, finally, the somewhat reluctant University of Pecs (20,000 students) took up the offer.

In the past 18 months, 12 universities have been converted to asset management foundations. Only one, the University of Theatre and Film Arts, has openly defied the government, making international headlines when students and staff took to the streets to protest at what they saw as a politically motivated government takeover.

Students of the University of Theatre and Film Arts (SzFE) and...