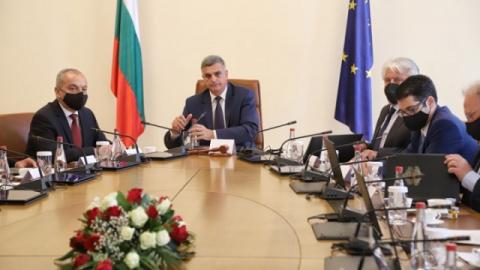 The caretaker government has discussed whether to extend until the end of its term of office the payment of additional BGN 50 to pensioners as promised the government of Prime Minister Boyko Borissov.

The cabinet sitting is still underway, but two of the ministers - Galab Donev, Deputy Prime Minister and Minister of Labor and Social Policy, and Assen Vassilev, Minister of Finance, announced some of the decisions to the media.

Money for pensioners is the top priority, they declared. For the other measures - 60/40 and 80/20 payroll support, aids for and parents whose children study remotely and they are on unpaid leave will also be discussed and within 7 to 10 days the results will be announced.

The country's financial state is dire, Galab Donev said, explaining that consulting and audit of the inherited situation was carried out together with the Minister of Finance Assen Vassilev.

However, they have agreed that pensioners will still receive theirBGN 50 bonus till the end of the caretaker government tenure, the Minister of Labor explained.

"The current situation is severe because of the coronavirus crisis, but society expects a response from the caretaker government as for how long socio-economic support measures will apply. Unfortunately the financial resource for it may be exhausted by the end of May - June. Bulgarian business has suffered from the restrictive anti-epidemic measures, especially some of the sectors,...