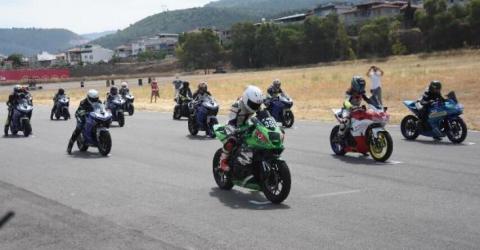 In Turkey's first motor speedway championship for women organized between May 29 and 30 in the western province of İzmir, 20 female motorcycle racers competed on the tracks.

The country's first professional female motorcycle racer, İlayda Yağmur Yılmaz, bagged the winning trophy in the race where many participants were competing for the first time in their lives.

Thanking the organizers, Yılmaz said: "We witnessed something new in Turkey. This is a first step that will lead some more women to race."

Melisa Erçelik was a runner-up and Pınar Altuğ Tüfekçioğlu finished third in the race.

Naming the women racers "Brave hearts," local newspapers used headlines likes "Women on the tracks," "20 brave hearts," "The winner of the races is courage of women," and "Women racers took the breath away."

Turkish Motorcycling Federation and Yamaha Motors organized the first leg of the Turkey Track Championship, where the women racers competed in the SS300 category.

No spectators were allowed due to the coronavirus measures in the two-day races, but world-renowned motorcycle racer Kenan Sofuoğlu was one of the officials following the race. Before and after the competition, he gave bits of advice to female riders.