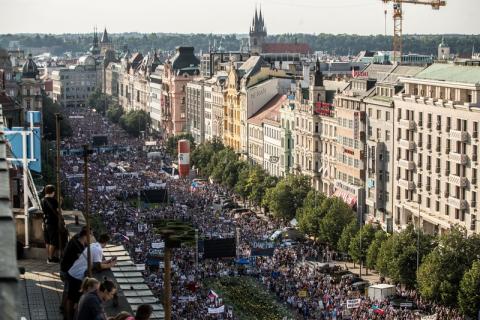 A 26-year-old evangelical Christian and theology student at Prague's Charles University, Roll founded Million Moments alongside Mikulas Minar in 2017. Dressed in his trademark mustard-yellow, it was the red-headed Minar who originally chaired the organisation and so featured prominently on the front pages as the biggest protests in the country since the Velvet Revolution erupted.

Million Moments' warnings over attacks on democracy by the populist Prime Minister Andrej Babis and the scheming President Milos Zeman have barely paused during the COVID-19 pandemic. But with Minar having left to pursue a bid to launch a political party, Roll is now seeking to regain the momentum lost during the movement's 18-month absence from the streets.

"The last year has been very hard for the democratic part of our society," Roll tells BIRN. "There were many scandals and we couldn't express our anger in a major way. We tried various ways to protest safely, but it was tough."

Demonstrations were held in cars and Prague's famous Old Town Square was covered in painted crosses to mark the casualties of the pandemic. But protest is largely a numbers game that depends on grabbing media attention with large crowds.

So, with the pandemic receding and the election fast approaching, Million Moments is returning to the streets. Its first major protest since November 2019 was held in April. Around 10,000 people gathered on Prague's iconic Wenceslas Square to call for action against Zeman for his argument against the findings of the security services that Russia was behind the 2014 explosions at the Vrbetice munitions depot.