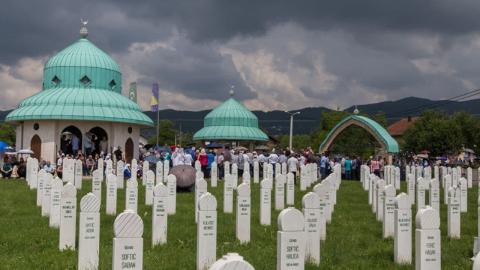 Twelve war victims were buried on Tuesday at the Kamicani Memorial Centre in Kozarac, at a ceremony that was attended by the Bosniak and Croat members of the tripartite Bosnian presidency, Sefik Dzaferovic and Zeljko Komsic.

Their remains had recently been exhumed from mass graves at Koricani Cliffs, Tomasica, Hrastova Glavica, as well as from sites in Kozarac.

The funeral ceremony for recently-exhumed war victims from the Prijedor area, which is held annually on July 20, this year coincided with the Islamic holiday of Eid al-Adha.

"The joy of Eid is mixed with our sorrow," said the grand mufti of the Bosnian Islamic Community, Husein Kavazovic.

"Twenty-nine years have passed and we are still holding funeral services and only dear God knows how long it will take until we do them all, and until we put the last brother, father, sister and mother into the earh," he added.

Addressing the gathering, Kavazovic said that the perpetrators showed no signs of remorse.

"Such crimes could only be committed by people without faith, morals and shame. It is our job to demand justice and be prosecutors, to point fingers at murderers," he said.

The youngest of the 12 people from Prijedor to be buried on Tuesday was Fikret Maroslic, who was 21 when he was killed. His father Himzo, who was 47 years old at the time of his death, was also buried.

Both were killed in 1992 at the Koricani Cliffs, a notorious execution site where Bosniaks from the Prijedor area were lined up on the edge of a ravine and shot dead by Bosnian Serb forces in 1992.

The Prijedor area saw a series of attacks by Bosnian Serb forces in 1992.

Mirsad Duratovic, a prsion camp detainee during the war, said that 3,176 people were killed and many...