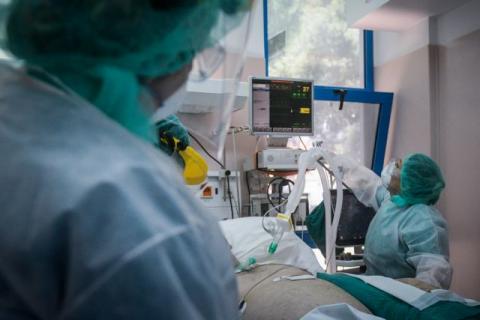 With the highly transmissible COVID-19 Delta vaccine spreading quickly, Greek epidemiologists and doctors are incessantly calling on citizens to be vaccinated as otherwise the majority of unvaccinated people will be infected.

Achilleas Gravanis, a professor of pharmacology at the University of Crete, recently made public analytical data and unsettling projections about the spread of the virus.

Gravanis said that that by the end of the year 35-40 percent of the unvaccinated population will have been infected. Of these cases, it is projected that 10-15 percent will be hospitalised and five percent will die.

The latest data indicate that about 48 percent of Greece's population are fully vaccinated. Greek experts say that 82 percent of citizens must be vaccinated in order to build an effective wall of immunity against the Delta variant.

Aside from the fact that the unvaccinated are entirely unprotected in the battle against COVID-19, they obstruct the construction of a strong wall of immunity.

According to data from a survey conducted by the Pulse polling company in cooperation with the National Public Health Organisation, 3.1 million citizens have not booked an appointment for a jab.

The alarming div is that 40% of those survey have definitively decided not to be vaccinated, while 24 percent said they will do so much later.

The poll indicated that the Delta variant has substantially increased the fear of those surveyed. Sixty percent responded that they are either very concerned (32 percent) or quite concerned (28 percent).

That represents a sharp rise in the last two months. In a Pulse poll conducted between...